MANHATTAN, NEW YORK—Everyone knows that parents are exploding with opinions and ideas about quarantine and how next school year should look, but what about the people GOING to school? What do the kids think? Our goal was to find out!

We created and sent out a survey to 56 kids, ages 7-18, who all sent back interesting and informative answers. Each kid gave their own opinions on what quarantine is like for them and what schools should look like in the fall.

According to our polls, 55.5 percent of kids said that there should be online school one day, in-school the next, every other day for the coming school year. On days in the school building, you would have to wear a mask and follow the social distancing guidelines.

This solution may have the popular vote because it has so many different benefits for different age groups. A very important detail about this solution is that half of the students would come into the building one day and the other half the next. This would ensure that fewer students would be walking around the building, making each student have a lower chance of getting exposed to COVID-19, due to the fact that there are fewer people around them and would make it much easier to socially distance for six feet. This would benefit everyone and students would eventually get to see their friends and talk with people. It’s a great compromise between the two extreme solutions.

Teens in NYC generally have a farther commute than kids of younger ages to get to school. So this solution would help teens because they would only have to commute half the time than they otherwise would have, which would mean that there would be less exposure on the subway, in the bus, on the street or anywhere else. Teens also might like this idea more than the full remote learning option because they tend to be very social; they would be able to see their friends AND be less exposed! There were only nine people who wanted to go completely online and, out of those, only four were teens. This shows that teens are social butterflies who use the subway, and this solution helps butterflies get around safely.

The Half n’ Half approach could also help the anxiety levels of teens because there’d be less stress about COVID-19 and the possible danger of contracting it on the subway; especially with kids who live in places with a lot of cases. Teens, on a normal basis, can have a lot of anxiety from peer pressure, school and their personal life. So also having to deal with commuting to different places and being exposed can be VERY overwhelming.

This also leads us to the reason why 45 percent did NOT vote for Half n’ Half. It is a good compromise between not getting exposed and being able to see people, but some just have too much anxiety for this; they really don’t want to risk being exposed. COVID-19 cases skyrocketed around the U.S. For this reason, 16 percent said that they DIDN’T want to go back to school in person. It does sound safer; just harder to live with.

Even though there are people who think that we should go COMPLETELY remote, there is still a solid 23 percent who believe that school should be COMPLETELY in person. This may be because we found that almost everyone who said this was from New York. According to CNN, New York had the longest lock-down time. This shows that because New York started to re-open and residents have started to go to outdoor restaurants, bars and stores, people are starting to feel more safe and more normal so they believe that our schools should be normal, too. Of course, these 23 percent believe that masks and social distancing ARE appropriate to ensure SOME precautions. The world is healing, but they know that it’s not COMPLETELY healed.

Then again, there are the five percent that believe that we should not only go back to school, but that we do NOT need masks and distancing and that business should be conducted as usual. This is a big minority from our polls because most believe that the sickness floating around could STILL cost lives. Even though numbers are going down there are still many precautions to be taken.

So what SHOULD next year look like? Parents argue about this a lot, but the people who are actually GOING to the schools opinions need to be counted! From our polls, we’ve come to a conclusion that most kids think that Half n’ Half is the way to go! A nice compromise that will not only keep children and families less exposed and much more safe, but give children the social and learning environment that they need to thrive.

We’ve covered what children think next year should look like, but how do children feel about this year? Specifically, quarantine.

According to the graph, 71.5 percent of kids’ feelings range from four to seven with 1 feeling depressed and awful and ten being COULDN’T BE BETTER! Why is there such a big difference between how everyone’s feeling? Well, what do kids miss most from the non-Quarantine days? Being social. They miss their friends! How do we know? Take a wild guess. We did a survey! 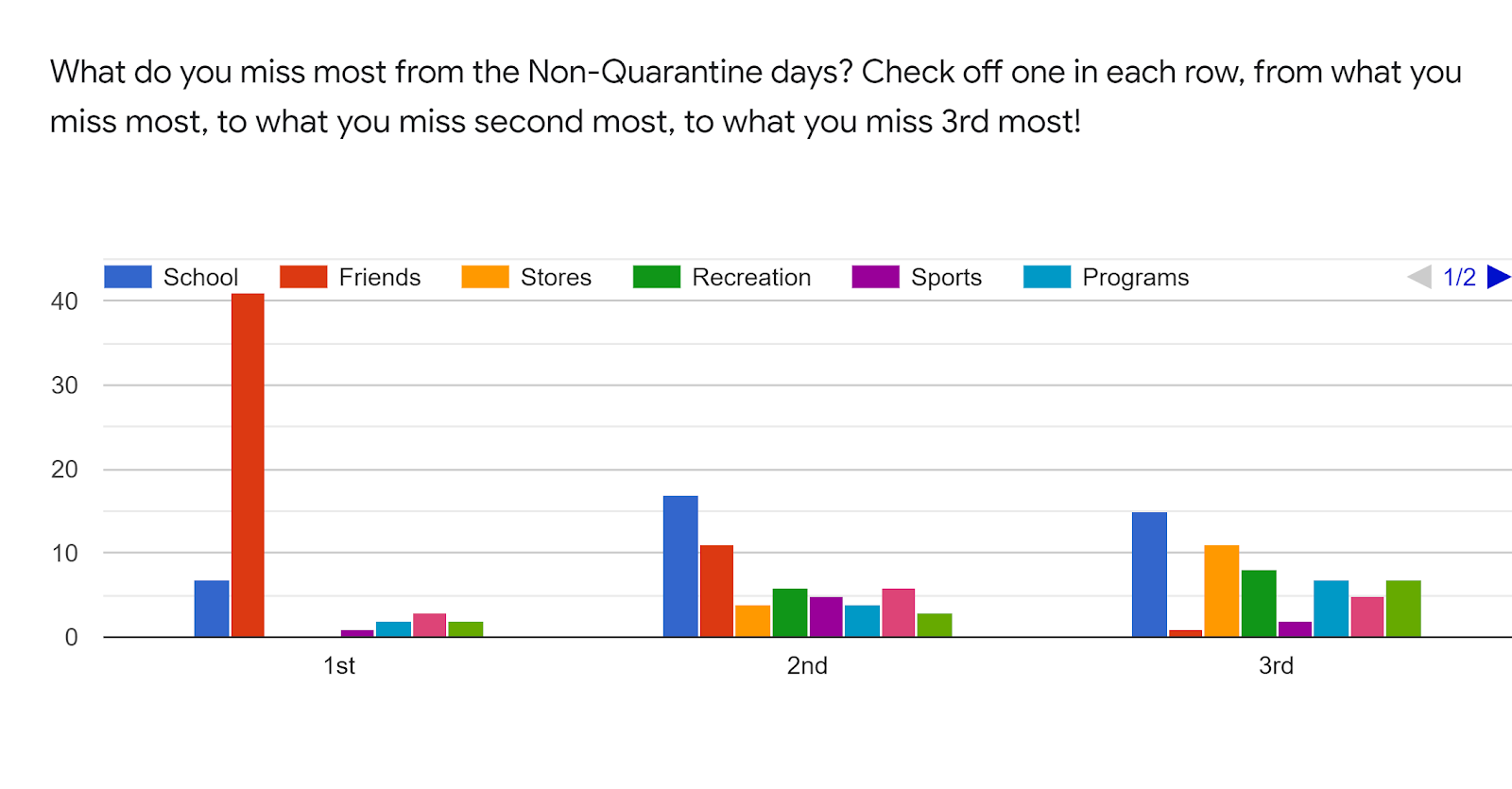 So many people miss their friends and it seems that a good way to feel better would be to communicate often! This sounds like a great solution! So have kids been being social to help feel better?

Apparently, they have! The MOST social butterflies seem to be having the happiest time! The people who gave us a ten for How Social Have You Been? had an average feeling of a seven! The kids who rarely ever Zoom averaged as a five. It seems like communicating and hanging out with friends can really bring spirits up!

This shows that because kids miss their friends so much, they communicate with them more often, which brings their happiness level even higher because they are seeing the faces of people they miss. Their happiness level is going up because they can still experience some normalcy, like watching their friends’ faces light up with joy. Even if it is over a screen. The people who might be less social or just Zoom less probably WON’T experience this as often, so they’ll be much more sad.

Parents’ opinions and feelings about the pandemic are important, but childrens’ voices are almost always overlooked. It’s important that whatever happens, children are taken into account. From school during COVID-19 this past year, to what school they want to go to, to even how school should look in the fall. Just because we’re young and smaller doesn’t mean we don’t deserve to be listened to in big moments that affect all of us. Quarantine Kids is empowering children’s voices to be heard. Especially now.

My City in Flames by Sierra Krueger-Wolf, 16

The Real Value of an Essential Worker by Skye Hoffman, 11

Have Filmmakers Given Up? A Debate on the Recent Increase of Sequels and Reboots by Madelynn Reilly, age 12

My City in Flames by Sierra Krueger-Wolf, 16